Hastings have now gained another former Magicbus Trident, this time in the shape of 17627 W627RND. This one however has come from Thanet and is in normal Stagecoach livery as it is one of the ones which came down early last year. This is due to replace an Olympian.

In other news, Solo 47174 YJ05XNH is now in service in Hastings, as a possible replacement for 47475, and 34789 has finally re-entered service after more than 3 months off road.

Right, think back to two months ago. There were absoloutely no Volvo B7RLE/Wright Eclipse Urbans in Hastings at all, but within the past month, four seem to have crept their way into Hastings & Bexhill based independent operators. These are the first B7RLEs to have ever been owned by a local company.

Firstly, Rambler Coaches of Hastings have acquired two Volvo B7RLE’s, which have been repainted into the rambler livery, and the wright badge painted black and silver – they look very smart. These vehicles are YK53GXO/P (Fleet Numbers 20/28), which were bought directly from Stagecoach Merseyside (quite surprisingly) which were their 21253/4. These were the very first two to be in Hastings and were new to First as 66705/6.

As well as this, Renown Transport Services have acquired two other B7RLE’s, which have been repainted into the renown livery, and similarly, look very smart. These vehicles are GN06EVH/L (Fleet Numbers Unknown), which were bought directly from Arriva Southern Counties (quite surprisingly) which were their 3805 and 3809. These were the next two to be into Hastings and were previously used om Fastrack Services, whilst with Arriva. Renown’s two seem to still advertise free Wi-Fi (whether they actually still have it, we are not sure) and some old Fastrack branding also seems to have been left on the windows.

If you want to try and find these vehicles, rambler’s two will most likely be on:
-Tesco Free Bus Services
-School Buses (mostly 342/356/382/383)
-Possibly occasionally Rail Replacement Services.

Thank you very much to Seaford & District for help and extra information! 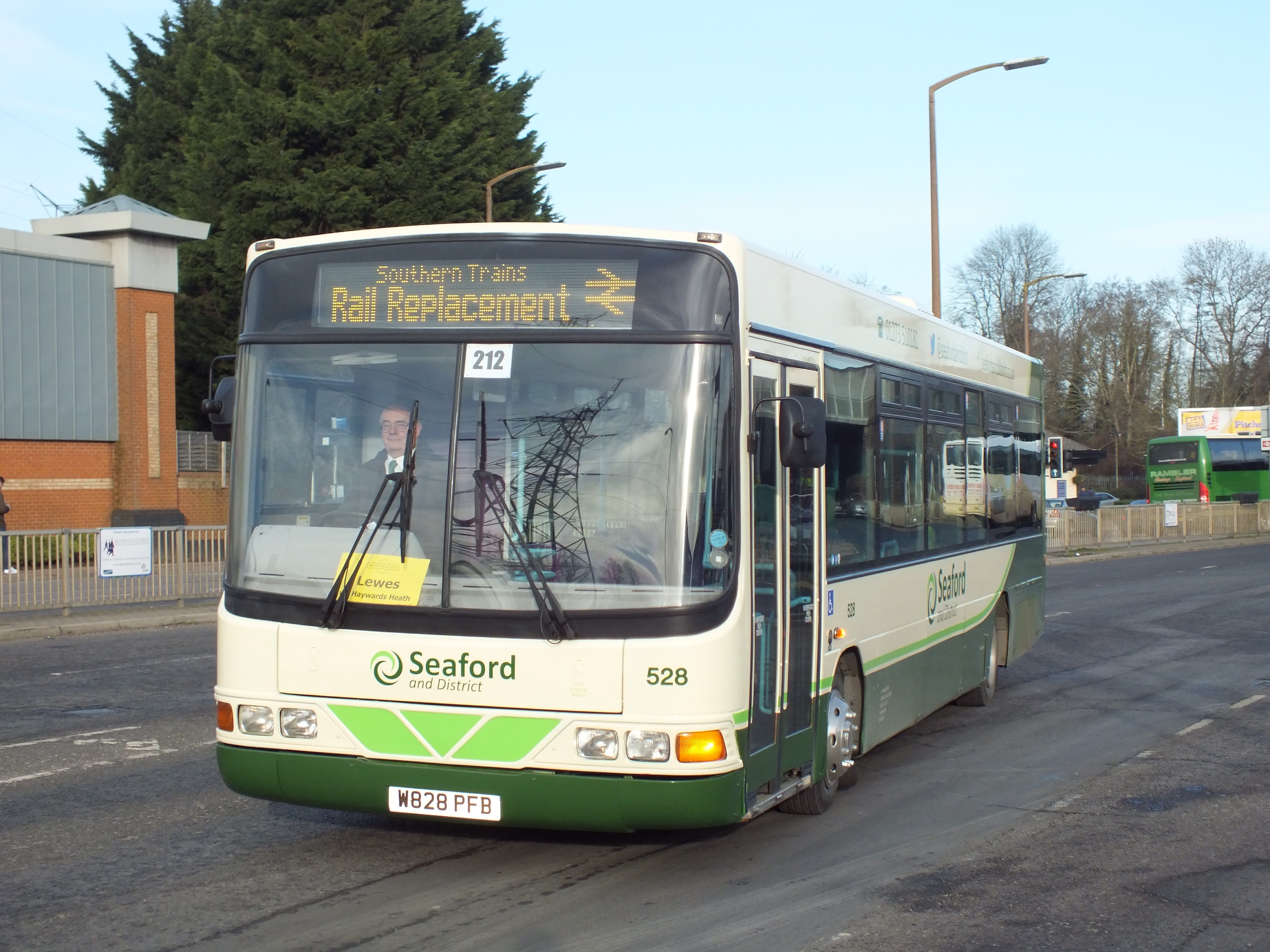 Here we see 528, W828PFB on it’s first day in service with Seaford & District, already in their smart, immaculate livery, leaving Three Bridges Station on it’s way to Lewes on a Railway Replacement service. (Photo by Alex Fairweather of the SEBEG) 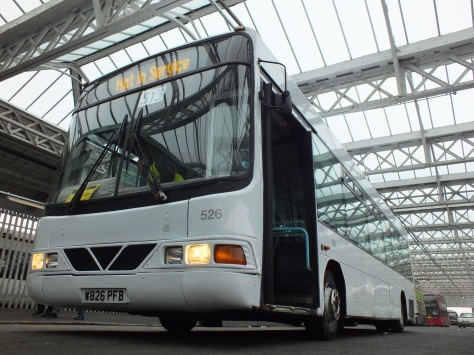 Here we have 526, W826PFB, a batchmate of the previous vehicle, from a low down angle just before leaving Eastbourne on a Railway Service to Hastings. This one is in Victoria Coaches livery and at some point will receive their Victoria fleet names/logos (Photo by Alex Fairweather of The SEBEG) 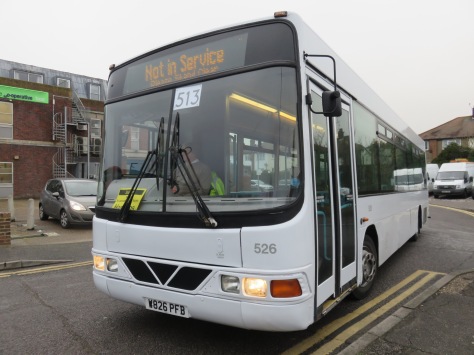 Here again is the same vehicle, captured at Polegate Railway Station, after a very pleasing ride on it! It has very good speed and the ZF Gearbox sounds great! (Photo by Harry Powell of The SEBEG) 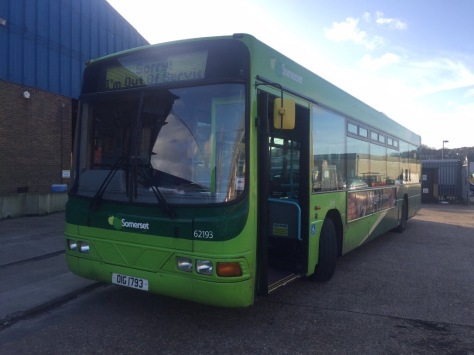 And last but not least, is the most recent Ex First Volvo acquired, OIG1793. It is seen here upon arrival from First Group, branded for Somerset Buses. Seaford & District have re-registered this vehicle as X23SEA and should have Seaford’s livery very soon, which it will look very smart in! This bus is a B10BLE, unlike the two previous others which are B6BLEs.

(Photo by David Mulpeter/Seaford & District, thank you for letting us use it!)
In other news, Seaford & District have also gained the contract for Eastbourne’s well renowned sightseeing bus service. There will be mostly modern double deckers used with an occasional surprise! So keep your eyes peeled. The launch date for the service is 19th of March, so save the date!

We are also hoping to add a Seaford & District Fleetlist to our site, which will be on it’s way shortly! 🙂

More Euro 2 Trident ALX400’s from Machester are making there way down to the Stagecoach in East Kent division, joining the 4 which made the move last year. 17628 (W628RND) and 17629 (W629RND) are currently on the journey down – 17631 (W631RND) also started the journey with them, however it later failed. It has been suggested that up to another 12 may come down, however we will have to wait and see if this materialises.

These are coming down to replace Olympians, as some of them are well past their best and suffering from problems such as chassis corrosion. The Tridents will be put into service quickly despite not being DDA compliant; it is expected that later on in 2016, once new vehicles have been delivered to the division, that some will be converted to DDA compliancy to replace the remaining non DDA Olympian’s.
Further updates will follow.

Number 02 CR65RAM has been sent for repaint,

Number 33 UDY910/M607UTV has been withdrawn and sent for scrap

To update you on some info for Stagecoach in East Sussex since the last update.

Eastbourne have started branding their E40D’s for the revamped 1/1A services. As well as this, 19659 OU60CVA has transferred to Eastbourne from Ashford and that has already been branded for the new 1/1A servies.

Volvo Olympian 16291 R291HCD, which was on loan from Basingstoke, has now returned to its home depot, and has been replaced at Hastings by batchmate 16297 R297HCD from Herne Bay.

Dennis Dart 34789 PX55EFU has joined the Hastings fleet from Gillmoss depot in the Merseyside & South Lancashire division, and 34620 PX04HTZ also arrived at Hastings from M&SL, and has gone to Ashford for repaint, however there is now uncertaintly as to whether this will now see service in Hastings.

35256 GX56OGG is now in the Reserve fleet having transferred from Winchester and is believed to currently be in Eastbourne depot. It is currently unknown for now where this will be allocated to.

Many thanks,
The SEBEG Team

Rambler Coaches of Hastings have recently purchased two brand new vehicles, one being a 35 seater Cummins Engined Yutong TC9 Touring midicoach, and the other being a full size coach, a DAF/VDL engined Irizar i6. The Irizar in in Rambler’s standard coach livery, however the Yutong is not. The Yutong is fleet numbered 2 and registered CR65RAM, the Irizar fleet numbered 22 but not yet registered. Updates and possibly pictures as well are to follow. Please view Rambler’s now fully completed Fleetlist on our site, HERE

Unfortunately we bring you the sad news that two of our buses have been withdrawn today due to exceptional circumstances.

Firstly, we understand that Dennis Dart 34847 GX06DWZ has suffered a major engine fire today which has caused severe damage to the vehicle.

Also today, Volvo Olympian 16362 N362LPN has suffered severe damage to its top deck after a collision with a tree.

It is likely that both vehicles will be sold for scrap as a result of today’s events, as the cost of repairing them will be extortionately high. This has also happened at a time when there have been a number of breakdowns over the past few days, so there is currently a huge vehicle shortage so there is a high chance of some buses visiting Hastings depot temporarily on loan.

Hello there guys, we have had some thought recently and we have considered renaming the website ‘SEBEG’ rather than SIHBEG. This would require us to change the domain from http://www.thesebeg.wordpress.com to http://www.sebeg.wordpress.com, and in due course we may upgrade to “www.sebeg.com” ‘SEBEG’ will stand for South East Bus Enthusiast Group rather than The SIHBEG, Stagecoach in Hastings Bus Enthusiast Group. We have decided we may do this because it would better suit the current and future content of our website as we plan to add additional fleetlists in the near future for other Bus & Coach Operators in Kent & East Sussex. This will require you to go to the address “www.thesebeg.wordpress.com” each time you visit our website or alternatively, google ‘SEBEG’. Please let us know what we think of your changes as your feedback and opinions are very important to us!!

Many Thanks,
Alex Fairweather

There will be major changes to services in Hastings, including the extension of service 21 to Bexhill via the Link Road and the withdrawal of service 29. There are also major changes to times and some changes to routings on Arrows services to allow for more running time to prevent late running. Full details can be found here: